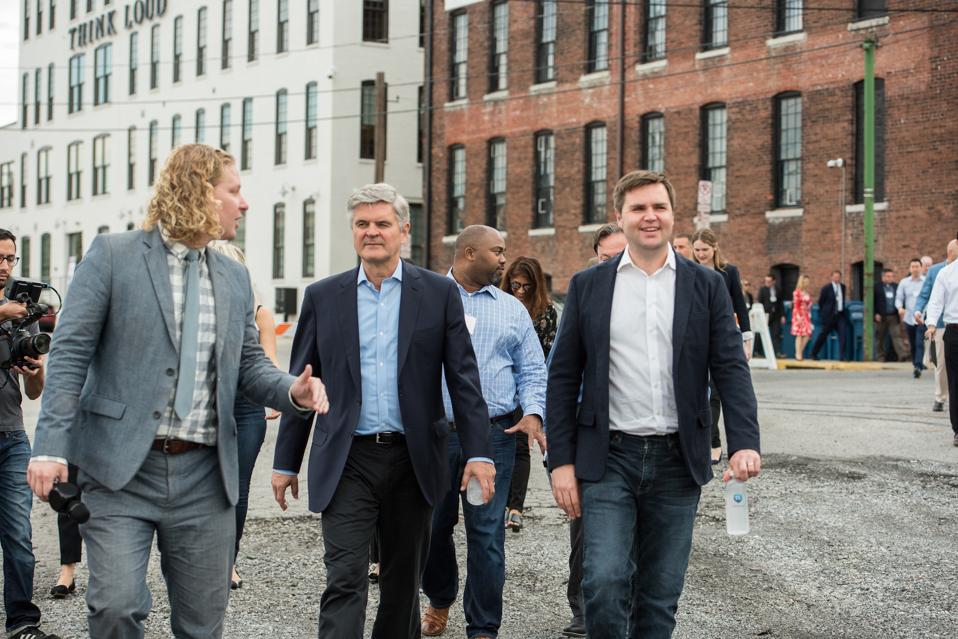 Steve Case, center, and J.D. Vance, right, will invest out of a new $150 million Rise of the Rest fund.

[Steve Case in York PA, the location of Pennsylvania’s only ‘Rise of the Rest’ winner – Device Events]

Steve Case’s Rise of the Rest campaign to promote entrepreneurship outside of Silicon Valley is getting its own fund.

Called the Rise of the Rest Seed Fund, the fund announced on Tuesday will invest $150 million in startups outside of tech’s usual stomping grounds and with the support of a group of three-dozen of America’s best-known business leaders including Jeff Bezos, Sara Blakely, and Howard Schultz.

Day-to-day management of the fund will fall to J.D. Vance, the Hillbilly Elegy author who joined Case’s investment firm Revolution in March 2017, joined by partner David Hall and Anna Mason, who has been directing Rise of the Rest investments in recent months. The team will look to make investments of less than $1 million alongside local partners, not leading rounds or taking board seats. “We hope we can be catalytic, in the visibility we can bring,” says Case.

For Case and Vance, the new fund is a natural evolution in expanding the Rise of the Rest network that had been in the works for a few months. Revolution set out to raise $100 million three months ago, but found itself over-subscribed with interest from Case’s friends and network that also includes investment titans such as Ray Dalio, Henry Kravis and Michael Milken, and business leaders such as Dan Gilbert, Sheila Johnson and Meg Whitman. “The first conversation we had was to collect a list of people we thought were iconic, highly visible entrepreneurs and investors to be involved,” says Vance. “First and foremost it’s a fund, but there’s a little bit of a movement, so we wanted individuals and not institutions. It’s a dream team of investors,” says Case.